St Giles Church lies about 1km to the east of Durham City and is a Grade 1 listed building. 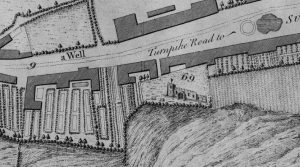 Detail of St Giles Church from ‘Plan of the City of Durham’ by T. Forster c.1754. Reproduced by permission of Michael Richardson (Gilesgate Archive).

St Giles’ was founded in 1112 by the Bishop of Durham Ranulf Flambard. The church was constructed as a chapel for the Kepier hospital that was erected along with the church. St Giles’ was dedicated on St Barnabas’ Day, 11 June 1112. 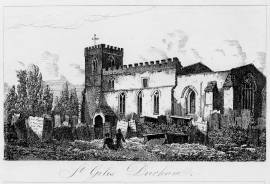 In 1143, the church became caught up in a dispute over the bishopric of Durham following the usurpation of the diocese by William Comyn, Chancellor of King David I of Scotland. The consecrated bishop, William of St Barbara, was forced to take refuge in the church. In response Comyn’s men destroyed the hospital, and possibly part of the church as well. 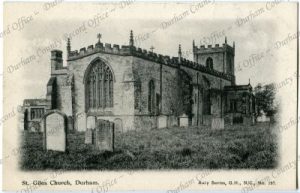 In 1180, Bishop Hugh Le Puiset (Pudsey) refounded the hospital at nearby Kepier and made extensive additions to the church. According to records, extensive building and restoration work was also carried out during the 13th Century and during Bishop Thomas Langley’s tenure as Bishop of Durham in the 15th Century. The current building still retains some aspects from Flambard’s, Pudey’s and Langley’s alterations, including the north nave wall c.1114; the chancel late C12th; and the tower early C13th and early C15th.

Revival in the Nineteenth Century 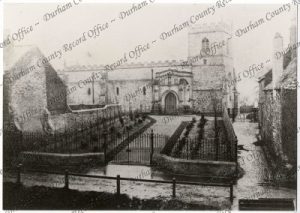 Whilst remarks about the church remain few and far between during the 16th and 18th centuries, we know that St Giles’ grew into the parish church and remained an integral part of the Gilesgate community. The 19th Century recognised the most turbulent period for the church as whilst the church underwent major alterations during the early nineteenth century, in 1852 the ecclesiastical parish of St Giles’ was divided, with the creation of the new Belmont parish.

Furthermore, in 1868, Rev. F. Thompson writing in the Transactions of The Architectural and Archaeological Society of Durham and Northumberland recommended the building be demolished. However, following a public outcry at the prospect of its demolition, the church was restored and extended (1873-76) into the current building that stands to this day. 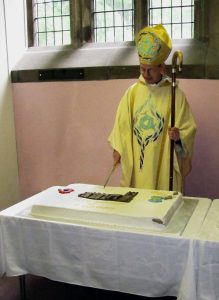 In 2012, St Giles’ Church celebrated its 900 anniversary, including a special service led by the Bishop of Durham (now Archbishop of Canterbury) Rt. Rev. Justin Welby.

For over 900 years, St Giles’ has been a living church at the heart of its community and will hopefully continue for the next 900 years as well!